The other day I received this question from a fifth grade teacher, referring to a challenge problem in the Bridges Student Book: "I would say this is too close to call. Anything other than wading knee deep into the computation will simply yield a guess, not a prediction. What do you think?" 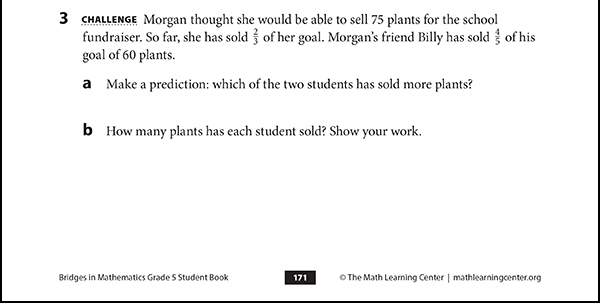 I approached the problem myself. Sure enough, by the time I’d arrived at a sensible estimate, I basically had an exact answer. But I realize the process had in fact been a useful one. And it prompted me to think carefully about why we invite students to make estimates and predictions.

First, we sometimes invite estimates or predictions to encourage students to stake a claim to the problem, to become more engaged than they would be otherwise. If they’ve made an estimate, they feel a sense of investment in finding out, via exact calculations, whether they were in the ballpark with their thinking.

Estimating also forces students to slow down when approaching the problem. Many of us have seen students jump in so quickly that they start applying operations that don’t fit the problem context. Making an estimate gives them a chance to notice what they already know, about the numbers and the context, before they begin computing.

For example, when I looked more carefully at the problem at hand, I noticed the numbers made me think of time and money. With that connection it became easy not just to make an estimate but to calculate the exact answer mentally, based on what I know about coins and time: 2/3 of 75 is 50 because 2 of the 3 quarters that make up 75 cents are 50 cents; and 4/5 of 60 is 48, because I know 1/5 of an hour is 12 minutes and 4 groups of 12 is 48. In the end, rather than arriving at an estimate, I arrived at an exact answer and I did so pretty quickly.

The teacher also wrote, “Interesting to note that many of my students predicted Billy. When I asked why, one said that 4/5 is bigger than 2/3 (and they had a common denominator to prove it!). … Of course none of that was recorded on the page—it just said ‘Billy.’” When he asked students to explain their predictions, he got more information about their understandings and misconceptions related to fractions.

I concluded the teacher was correct. Making a prediction just led me to calculate an exact answer, and I wondered if the problem was reasonable for fifth graders. There’s value in giving students the chance to invest thought before calculating. On the other hand, might there be a better, more transparent way to accomplish that? I’ve noticed that when asked to make an estimate, many students will simply calculate to get as close as possible to an exact answer. Some will even come back after solving the problem, erase their earlier estimate, and write in the final answer to make it appear their estimate was right on the money! When I see students do this, it’s clear we have not been transparent enough about why we’re asking for estimates and predictions!

I suggest that we be straight with students: making a prediction is not a contest to see who can get closest to the real answer. Rather, it’s a chance to slow down and think carefully before calculating. We might also ask different questions that invite students to make sense of problems. For example, “What do you know for sure about the solution to this problem? What do you think might be true? What do you wonder about this problem and its solution?”

Teachers, what do you think? What is the value of making estimates and predictions? What other questions do you ask to learn more about your students’ thinking and encourage reflection before they calculate? 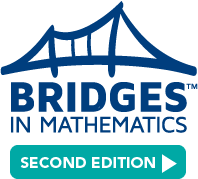