In grade 4 math, your child will:

Family Welcome Letter An introduction and overview of the year.
Available in English and Spanish.

The following selection of games and activities will help your child practice these skills at home.

Times Square This game provides practice with multiplication facts as players race to be the first to get 4 products in a row on the game board. Use "guest pass" to enter game list and play against the computer.

Factor Dazzle Players score points for finding all the factors of target numbers set by their opponents. Use "guest pass" to enter game list and play against the computer.

MathTappers: Multiples App compatible with iPhone, iPod touch, and iPad for math practice on the go. This is a simple, free game designed to help learners make sense of multiplication and division using visual models.

Drag Race Division Race to answer basic division problems. Students can race one another or play against the computer.

Dig It Players take turns digging in a field loaded with precious stones. The object is to collect as much dirt and as many stones as possible. Players tell the shovel where to dig by using a set of numbers to make a fraction–including improper fractions–and then locating that fraction on a number line that runs across the field. The more accurately they locate the fraction, the better their score. Students may need some help to get started. Use "guest pass" to enter game list and play against the computer.

Fraction Feud Players use number "cards" to create fractions that are larger (or smaller) than their opponents' in a series of mock jousts. See the "fraction bar chart" to figure out how big a fraction is in relation to an opponent's. Use "guest pass" to enter game list and play against the computer.

Drop Zone Players add fractions that will total 1 as they race to win 5 points in this action-packed game. Develops fraction sense, estimation, and skill at adding fractions with like and unlike denominators. Use "guest pass" to enter game list and play against the computer.

Fraction Fling Match fraction to the visual model and hit the fraction to answer the question. Players can choose to use mixed fractions while playing.

MathTappers: Estimate Fractions In this free app for iPhone, iPod touch, and iPad, students relate fractions (symbols and pictures) to the nearest half. Then they use fraction estimates in addition and subtraction problems. Excellent game to use while on the go.

Pecking Order Arrange fractions and decimals from least to greatest on a number line.

neXtu Players place shapes on a tessellating game board, collecting points and capturing opponent's pieces. Math concepts include: greater than, less than, tessellations, and symmetry.

Alien Angles Slide a bar to position a ray to estimate different angles in order to rescue lost space aliens.

The links below contain some of the best games for elementary math students to play at home. Look through the sites to find other games for your child.

ABCya! The math games on this site, modeled from primary grade lessons, were approved of or created by teachers.

BBC Bitesize This site contains a variety of high-quality games, including the “Dick and Dom” series, resembling mini movies in the style of Monty Python. Skip the money game on this British site. Also see BBC Bitesize Level 1.

Calculation Nation The National Council of Teachers of Mathematics Illuminations site hosts over 10 games that includes notes for parents. Students can either register and challenge other players online or use the "guest pass" button to enter the game list and play against the computer. Designed for upper elementary and middle grades.

Cyberchase The popular PBS show hosts a site with about 50 games and activities, along with movie clips that explore math concepts.

Johnnie's Math Page Use this online index to find hundreds of interactive math games on the web, organized by concept.

Disclaimer: The external resource links and product information provided on these pages are for the user's benefit and convenience. The Math Learning Center does not guarantee the accuracy, security, functionality, or completeness of external media, websites, products or services. Furthermore, the inclusion of these links and product information is not intended as an endorsement of the associated content, products and services, or organizations. All product names, trademarks, and registered trademarks referenced in these resources are property of their respective owners. Please note, some external resources may be incompatible with some devices.

The Math Learning Center provides a free collection of apps that can help your child learn and practice math concepts taught in their classroom. Learn more 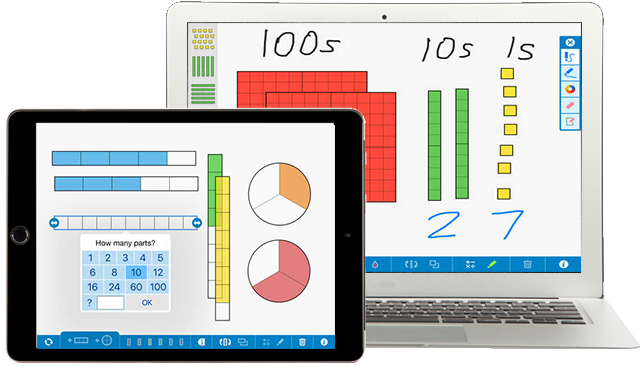